Why are you gone Loulou?

Why is it that my rarefied posts come in with sad news? A slight depression or what? Well, today it is Loulou de la Falaise who passed away at 63. How sad is that?
I was lucky enough to have met her a few times. Her life was “matière à roman”, stuff that novels are written with…. Behind Loulou was of course Yves Saint Laurent, the great man she met in 1968. Is this not a moment in time you would have liked to be part of? A tea organized for Loulou with Monsieur Saint Laurent by stylist and friend, Fernando Sanchez! 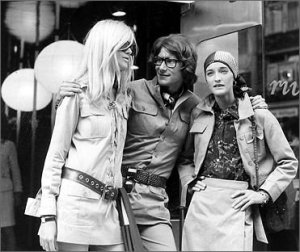 Four years later Loulou was hired by La maison Saint Laurent, becoming the official (can that be?) muse of the French couturier.
I remember being a young journalist in Paris in the mid-80’s, already a fashionista, invited to the Soldes Presse of Yves Saint Laurent. It was hysterical! By invitation only… yet the queue started at 8am in the morning and lasted close to 2 hours.. We were then ushered into this warehouse in the 7th arrondissement, filled with boxes, filled with Saint Laurent items! It was a dream.. and the price tags were minus 70%! And it was Haute Couture!. We bought all we could ripping off sweaters and pants from each other. I do have a ripped pant left…
Then Yves Saint Laurent retired, and we were thrown in a land in fallow in our heart… and in our wardrobe. No one seemed to fill the gap for elegant, feminine, yet sexy, and daring clothes. We had to support the ostentatious eccentricities of Tom Ford and become Material Girls with Jean-Paul Gaultier, but we missed being simply Parisian with YSL.Then came in Loulou with her own line in 2002. It was a feminine version of Saint Laurent: well cut jackets and suits, colorful liberty prints and oh! So beautiful jewelry… At generous press discounts, I did buy quite a few items. Loulou was always there in her beautiful shop on rue de Bourgogne, ravishingly elegant, and smiling. It did not hurt that she was married to Thadée Klossowski de Rola, Balthus’s son, another legendary character.

Loulou de la Falaise was a symbol of style, French wit. She WAS French fashion. She was beauty and beauty surrounded her. I will miss knowing she is not somewhere on this earth.

And clenching your fist for the ones like us
Who are oppressed by the figures of beauty, 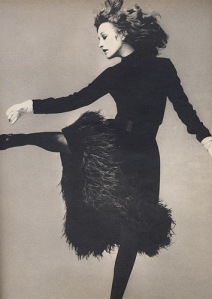