On Chaos and Classicism

Went back to see the show at The Guggenheim Museum on Chaos and Classicism but this time I was on for a special treat with a visit by curator Dr Kenneth E. Silver. So many things escape you if you go by yourself and are too lazy to linger on all the descriptions and valuable written texts on the wall. 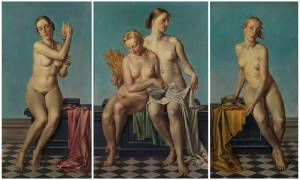 I had seen but missed the Hitler painting Adolf Ziegler’s  The Four Elements: Fire, Water and Earth, Air, 1937 – a poisonous scene with nudes as green  as  Gestapo’s uniforms, as emotionless Himmler special envoy disguised as a woman. This inspiring painting was hanging in Hitler’s Munich apartment above the fire-place. It is ugly – and this is how I saw it the first time  -, and yet incredibly riveting when one’s understands  the context. The whole exhibition is about mixing history and art, mixing media and in the end forcing the viewer to enter a special place in history when The first World War had created the chaos of lands and bodies and when all that was left was a virtual reference to the reassuring classic views of the body in painting, fashion or architecture,