Frenchness in the Hamptons

Sometimes you get caught up by life. It would be nice if life was a blog or if the blog was your life. back to the blog…

I love the Hamptons. For a French person,  the Hamptons seem equidistant from New York and the South West of France. 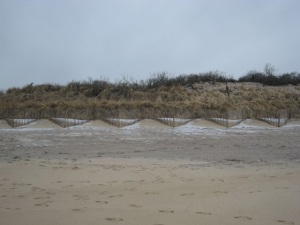 I have discovered this area many years ago as a student in New York. My love for this chain of villages caught between forest and sea has never failed. I like all about it:  Dan Rattiner and his self-centered editorials in Dan’s Paper, the ever-changing ocean, the manicured gardens, the vegetable stands that mix homegrown vegetables and …- where are those peaches from anyway?- , the company of many friends, an eclectic crowd who shares the same love for the place. I love bonfires on the beach, well cooked diners, yoga classes all over the place, Kmart at Bridgehampton Commons and I love Pierre.

I have known him for a very long time and I like to say ( we always rewrite our history and that of our friends, it is a life process!) that I was the one who introduced him to Bridgehampton. He might contest that idea.  Nevermind, like all the women who know Pierre,  I want to have a little part of him. My demand is as we say in French “en tout bien tout honneur”. He is a friend, always has been. Hey guys! I don’t have to justify myself here! Any way this is Pierre’s French touch. He gets people to get involved in his life and to take him under their wings.. Well,  Pierre is now a real celebrity in the Hamptons, in Bridgehampton with his restaurant Pierre”s.

Pierre Weber comes from Alsace from a family of bakers. He arrived in New York in the 80″s and run a a professional bakery, opened a take out restaurant in NY. Did well. But life ( or is it partners?) was harsh on him. he had to start anew in difficult times. He opened Pierre’s in Bridghampton in 2001. Frankly, as his friends,  we were quite skeptical. The Hamptons was then a seasonal hang out. But he did it and advertised being open 24 hours a day 7 days a week.In 10 years  he has created “the place to be” t with a French touch where bread, French fries and wine are good. On Sundays,  there is jazz; on the walls,  he exhibits the works of local artists. It works. I am so proud of my friend  (Remember I introduced him to the Hamptons! ). This Summer he opened a take out where the price of croissants is skyrocketing but some of us can afford a gold-plated breakfast ,  so why not! Now the story:

this week-end Bill Clinton and family, Hillary, Chelsea and husband came to Pierre. (Pierre’s birthday was on the 29th. they just missed it by 2 days and came on Friday night. Never mind they are forgiven!). 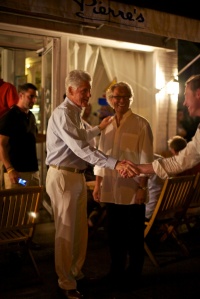 Wow!! so much for the freedom fries! It is Bastille day everyday at Pierre’s (http://www.youtube.com/user/PierresBridgehampton#p/u/1/T3urnhzvpAQ) .

The war in Irak just ended and we are back on track, a long-lasting track of franco-american friendship. I love it!

One response to “Frenchness in the Hamptons”