The other Sun King….

If I were French President Nicolas Sarkozy, I would be rather anxious as yet another Sun King is rising over France. If you do not know who the man is, if you are Candide arriving in France – I should probably say Paris- , you would bet that this man is ruling the country. With his white hair dressed in a ponytail looking like Louis XIV himself, nicknamed The Kaiser (The Emperor), he has an ubiquitious presence that leaves little doubt on his level of influence. 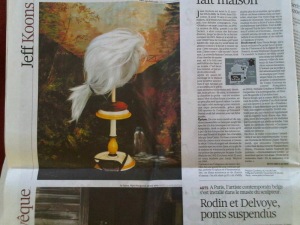 And not only Sarkozy should fear him but also Royal, Villepin and all the future candidates at the next French presidential election. Arriving in France on June 22nd, I discovered on the stands a special editon of Libération entirely dedicated to Karl Lagerfeld. “Karl Lagerfeld Rhabille Libé” ( Karl Lagerfeld Dresses up Libération”);

The issue is a collector with wonderful large spreads with drawings by the stylist himself. On Afghanistan, on the defeat of Les Bleus, Lagerfeld has his says. Wonderful drawings, full of humour! A real pleasure! In the stores ( only in France), you can buy the limited edited bottles of Coca Light redesigned by Chanel creative director.

As the world knows by now, Karl Lagerfeld has lost superfluous kilos thanks to a strict diet and… Coca Coca light. I remember interviewing Lagerfeld’s chef for French Vogue and thinking to myself that following a diet in such a way ( top ingredients, top service) must have made things a little easier. An ad campaign with the bottle is in all the magazines. Coca Light had asked other designers in the past ( Sonia Rykiel, Manolo Blahnik). This time the campaign was shot by Karl Lagerfeld himself and features Coco Rocha and Baptiste Giabiconi holding the limited edition aluminum bottle on a flying tray.

Lagerfeld is brilliant, wordly, creative, multi talented and multi tasked. His name is everywhere in France on the “cul de bus” , on the buses, in the metro, in the press.Today he will be interviewed on French TV LCI. What is the next step… The Kayser at The Elysées? A total reconciliation between France and Germany? Now what would be Lagerfeld first move at the Elysées?

I would say following the famous line “Never too thin, never too rich”, replace the ISF ( Impot Sur les Grandes Fortunes) by a new tax. The thinner, the richer, the more taxes you have to pay ! 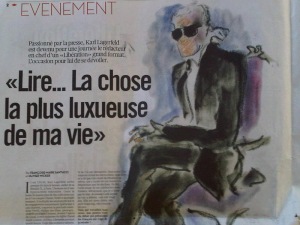 I am waiting for your comments and ideas!

One response to “The other Sun King….”