A tribute to Queen Louise 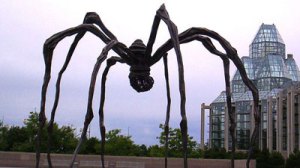 Louise Bourgeois died yesterday at 98 in New York. The French like to think of her as a French artist, New Yorkers, as a New Yorker.Louise Bourgois did not care much about either nationality. Her only attachment was to her own story, her own family. ” The subject of pain is the business I am in”  quoted Holland Cotter in his New York Times obituary. She resented her father’s long time liaison with a family babysitter, his betrayal. As Editor-in-chief of France-Amerique in July 2008, in the wake of Louise Bourgeois’s major show at the Tate Gallery in  London,  I remember publishing an essay by photographer and writer Dominique Nabokov. “Portrait of a Fugitive” was the title Dominique chose for her story.  Louise and Dominique were neighbors. “We live one block away on 20th street between eight and tenth avenue. We are  “Chelsea Girls” and were so well before the district became a Mecca of Contemporary Art. On the way to my photo lab, I walk past her house, a simple looking 3-floor brownstone. Each time, I look at the large barred widow  of the downstairs room . A light is always on. This is where the famous Franco-American artist usually works.” Dominique in her piece also described the Sunday sessions at Louise Bourgeois’ . She would be surrounded by a circle of friends and admirers listening to the monologue of  “Queen Louise” as Dominique nicknamed her. with humour …”I don’t answer questions. I ASK questions”  used to say Louise Bourgeois.” One should not expect from Queen Louise compliments or encouraging sentences.”, said Dominique who has agreat admiration for this artist who waited until her seventies to see her talent fully and internationally recognized . Illustration was a wonderful photo in black and white of Louis Bourgeois ‘s living room, taken by Dominique with Polaroid Colorgraph type 691 film and  published in her  book ” New York Living Rooms” . ( New York Living Rooms by Dominique Nabokov. Introduction by James Fenton,Penguin September 1998)