Longchamp back on Madison

” You are finally opened!’ said a client to  Olivier Cassegrain, CEO of Longchamp USA and grand-son of the founder, as she discovered the new store on Madison and 63rd street, just opened.

The previous shop –  two blocks down – closed on January 27 2009. A year and a half without Longchamp sounds like an ordeal for this dedicated customer! She could have checked the Soho store downtown, opened four years ago.” It is a different clientele. Here we have a residential crowd. In Soho,  it is very touristic”,  says Olivier interviewed in the new store.

He is a happy man : his offices moved  to the third floor of the new building. He is  back uptown with  relief. The store is beautiful and the design by Carbondale architecture studio, full of  ideas. No angles but subtile  V lines even on the terrazzo floor with stripes of metal; adaptable decor with colored  panels to be added on the wall; a high ceiling room in the back with a back wall to display a chromic painting by Venezuelan artist Carlos Cruz Diez; two different windows on the first and second floor giving added exposure to the store from the street,;a retail display hanging over the stair inspired by the The Parisian Bouquinistes.

Longchamp has now a great shoe line as well as a Women collection designed by Olivier’s sister Sophie. Check out the Kate Moss line as well as the great limited edition by Jeremy Scott .

All in all,  many references to the famous Pliage, famous folding bags displayed on a special wall. And why not.  16 millions of folded bags sold in the world! Across from Longchamp is Mauboussin and the new chocolate bar by Francois Payard. 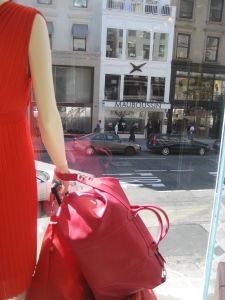 It is all very French and inviting.Olivier Cassegrain, heir to the founder and established in New York for the last 10 years, is planing a major opening on July 14th, Bastille day of course!